We are actively developing cutting-edge technologies to pursue novel hypotheses that axonopathies are early cellular manifestations of neuronal dysfunction and degeneration in neurodegenerative disorders.
​Our current projects are listed below: 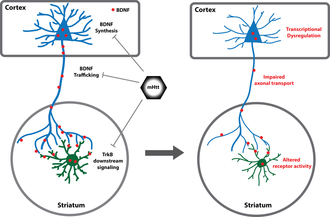 1.  Mechanisms of cortical-striatal atrophy in HD
We focus on the investigation of axonal trafficking and signaling of BDNF in mouse models of Huntington's disease (HD). Our studies have demonstrated that defective axonal transport of BDNF in cortical neurons contributes significantly to striatal atrophy in HD. More importantly, we have shown that TRiC chaperonin has a protective role against axonal toxicity induced by mutant Huntingtin. ​​

​2.  Axonal dysfunctions in Tauopathies.
Tau is a microtubule associated protein (MAP). Hyper-phosphorylation or mutations in many sites on Tau are believed to contribute to its significant neurotoxicity.  Using human neurons differentiated from iPS cells derived from human Tauoapthy patients, we are interested in understanding:  1: how pathogenic Tau species affects axonal transport of neurotrophic factors such as BDNF;  and 2: if and how pathogenic Tau can spread via axons from neurons to neurons, or from glia to neurons, or vice versa. 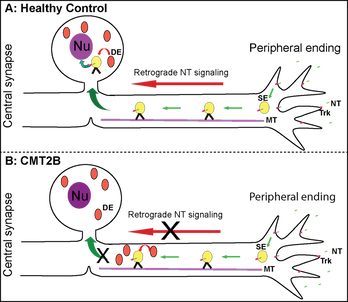 Click image to enlargeCharcot-Marie-Tooth disease type 2B (CMT2B) is caused by autosomal dominant mis-sense mutations of the small GTPase Rab7 in people. We will investigate, both in vivo and in vitro, the hypothesis that CMT2B Rab7 mutation(s) causes hyper-activation of Rab7 and disrupts axonal trafficking and signaling of neurotrophic factors, leading to axonal degeneration of peripheral sensory neurons. The hypothesis is built on our in vitro studies published previously (Zhang et al., 2013, J Neurosci. 33:7451-62); and our strong preliminary in vivo results of the first ever mouse model of CMT2B, demonstrating sensory dysfunction in a knockin mouse model. In addition, we have obtained human CMT2B fibroblasts together with their control cells.  We plan to convert these cells into sensory neurons using the recently developed technologies by our collaborator Dr. K Baldwin at TSRI. By carefully examining the animal model, studying the cellular and molecular mechanisms in both animal neurons and human neurons, we will gain significant insights into the pathogenic mechanism(s) of CMT2B towards potential therapies for this debilitating disease. 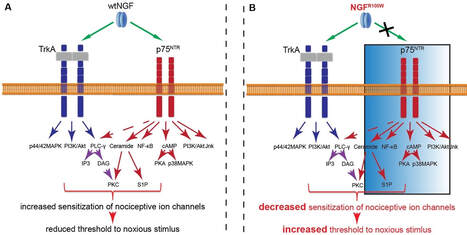 4. Molecular and cellular mechanisms of HSAN V
Hereditary Sensory and Autonomic Neuropathy V (HSAN V) is associated with a naturally occurred autosomal recessive mutation in NGF, discovered in a Swedish family whose patients suffer from selective loss of sensation to deep pain.  In this project, we will investigate and characterize the signaling mechanisms of this novel NGF mutant both in vitro and in vivo.  We will study how the mutation alters NGF’s ability to signal through TrkA and/or p75.  Our preliminary studies support the hypothesis that the mutant NGF retains its ability to signal through TrkA while no longer engaging the p75-mediated signaling pathways. We are actively exploring the potential use of this novel NGF mutant for treating peripheral sensory neuronal degeneration such as diabetic neuropathy, CHEMO- and HIV-induced neuropathy.